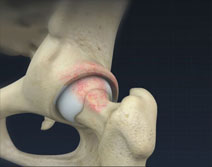 What Is Femoral Osteoplasty?

Femoral osteoplasty is the surgical reshaping or alteration of your femur (thighbone). The surgery is required if you have an abnormally shaped femoral head or neck which causes pain with hip movement.

Your doctor normally performs femoral osteoplasty if you have a condition called femoroacetabular impingement (FAI), a common cause of hip joint pain in young adults. Your hip joint is a ball-and-socket joint. FAI is often characterized by the formation of bone spurs on the femoral head (ball) or the socket (acetabulum) of the hip joint. These spurs are called cam lesions or pincer lesions.

A cam lesion is a bone spur formed on the femoral head (the ball) of the hip joint. When this occurs, your femoral head does not appear round but may have a bony bump on one side which contacts the socket abnormally on movement of the hip joint. This may cause injury to the cartilage lining the articular surfaces of the joint and can result in unbearable hip pain. Femoral osteoplasty can correct the abnormality and eliminate or reduce the pain.

Initially your doctor may recommend simple and non-operative measures such as rest, physical therapy, anti-inflammatory medications or certain types of injections to treat your condition. If conservative treatment measures do not improve the pain, surgery may be recommended called femoral osteoplasty.

Femoral osteoplasty may be performed by:

Your doctor may choose the type of surgery depending on the severity and location of the abnormality. However, the less invasive arthroscopic procedure is normally preferred.

During arthroscopic femoral osteoplasty, your doctor will:

The goal of the procedure is to relieve the pressure on the labrum, increase the clearance in the joint and improve the range of movement in the hip joint.

If the condition is more severe or in an area that cannot be reached by arthroscopy, your doctor may perform an open osteoplasty to:

Following the procedure, your doctor will advise you on appropriate rehabilitation procedures to help you recover and return to daily activities.